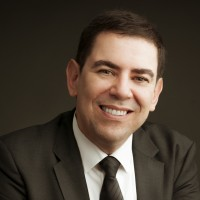 Personal Background and Education:
Prof. Antonio H. Castro Neto got his Ph.D. in Physics at University of Illinois at UrbanaChampaign in 1994. In 1994, he moved to the Institute for Theoretical Physics at the University of California at Santa Barbara as a postdoctoral fellow. In 1995, he became an Assistant Professor at University of California at Riverside. In 2000, he moved to Boston University as Professor of Physics. At Boston, Prof. Castro Neto became one of the leading theorists in the study of graphene and other two dimensional materials. Since 2010, Prof. Castro Neto is the Director of the Graphene Research Center and in 2014 he became Director of the Centre for Advanced 2D Materials funded by the National Research Foundation of Singapore.

Prof. Castro Neto is a Distinguished Professor in the Physics Department and Professor at the Department of Electrical and Computer Engineering and the Department of Material Science Engineering at the National University of Singapore. In 2003, Prof. Castro Neto was elected a fellow of the American Physical Society (APS) and in 2011 he was elected a fellow of the American Association for the Advancement of Science (AAAS). He is the Colloquia Editor for Reviews of Modern Physics, and member of the Editorial Board of “Chinese Physics B” and “Acta Physica Sinica”.

Research Interests and main results:
Prof. Antonio H. Castro Neto is a materials scientist and condensed matter theorist who is achieved world recognition for his works in rare earths, actinides, and two-dimensional (2D) materials such as transition metal dichalcogenides, and graphene, including conception, characterization, theoretical modelling, and development of transformative technologies based on two-dimensional crystals. He became one of the leading theorists in the study of graphene and (in Boston University) a collaborator of Prof. Sir Andre Geim and Prof. Sir Konstantin Novoselov, winners of the 2010 Nobel Prize in Physics for the discovery of graphene. Graphene Research Centre (GRC) managed by Prof. Castro Neto is one of the first and the best known research centre in the world to explore the properties of graphene.

In 2014 established Centre for Advanced 2D Materials (CA2DM) led also by Prof. Castro Nero explores 2D crystals beyond graphene and their industrial applications in several different industrial sectors such as energy, water, food, and environment. In 2016, Prof. Castro Neto founded 2D Materials (2DM) Pte Ltd in Singapore for the development of high quality graphene, and in 2017 he founded MADE Advanced Materials Pte Ltd for the development of graphene composites with carbon and glass fibres.