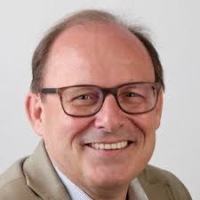 Position: Distinguished Senior Researcher at Empa - Swiss Federal Laboratories for Materials Science and Technology in Dübendorf, and Professor of Chemistry at the University of Zurich, Switzerland

At the NANOCON´18 conference Prof. K. H. Ernst will present an invited lecture at the session A “Molecular surface chirality: From electron spin filtering to molecular machines”.

Personal Background and Education:
Karl-Heinz Ernst was born in Northeim (Germany) in 1959. Originally trained as Chemical-Technical Assistant, he studied Chemical Engineering at the University of Applied Sciences Berlin (TFH, now Beuth) and Chemistry at the Freie Universität Berlin. In his Diploma thesis (On the interaction of glycine with a platinum (111) surface) in 1985 he was the first (outside of Berkeley, California) to address the adsorption of biologically relevant molecules on single crystal surfaces in ultrahigh vacuum. He earned his PhD in Physical Chemistry by studying the adsorption of hydrogen on Co (10 -10) at the Berlin Electron Storage Ring for Synchrotron Radiation (Bessy I) and the Freie Universität Berlin. After a post-doctorate study at the University of Washington in Seattle, he joined in 1992 Empa, the Swiss Federal Laboratories for Materials Science and Technology, where he established the Molecular Surface Science Group. He spent several research stays at Berkeley (Physics Dep.), Seattle (Bioengineering Dept.), Beijing (CAS-IOP) and IBM Almaden. Three years after his Habilitation at the University of Zurich in 2007 he was appointed as Titular professor. In 2014 he got promoted to Empa Distinguished Senior Scientist.

Research Interests:
The research group of Prof. Ernst performs state of the art research on molecular surface systems with the scope of providing more insight into molecular self-assembly, crystallization phenomena and molecular surface dynamics. Investigating well-defined two-dimensional model systems with scanning tunneling microscopy (STM) and other surface science methods allows a better understanding of complex mechanisms in materials science in general and will help to find new approaches in materials and devices design where molecular self-assembly plays an important role.

The following topics are addressed by the group include: Molecular Chirality and Surfaces Molecular Motors, Organic Electronics, Nanoparticle Surface Chemistry and Surface-functionalisation with non-planar aromatic hydrocarbons.