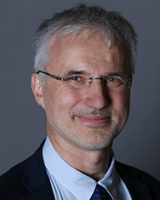 Institute of Physics of the CAS, Czech Republic, EU

Position: Statutory Deputy Director and Head of Department of Thin Films and Nanostructures at the Institute of Physics of the Czech Academy of Sciences, Prague, Czech Republic.

Specialization: Physics of Thin Films of Nanostructured Semiconductors for Application in Solar Cells and Photonics.

At the NANOCON´18 Dr. Fejfar will present invited lecture „New role of silicon thin films in advanced photovoltaics” at the session B Industrial & Environmental Applications of Nanomaterials.

Personal Background and Education:
Dr. Antonin Fejfar was born in Počátky (Czech Republic) in 1962. He received diploma in physics (MSc.) at Charles University in Prague, Faculty of Mathematics and Physics in 1986 and he earned his CSc. (Ph.D. equivalent) by studying the preparation of thin films of organic semiconductors at the same Faculty in 1991. After his post-doctorate stay at Kyoto University/Faculty of Engineering (Japan) he joined in 1994 the Institute of Physics of the Czech Academy of Sciences (CAS) in Prague. A. Fejfar spent several study leaves abroad as a visiting professor at the Institute for Chemical research, Kyoto University (Japan) and as a visiting researcher at the Laboratory of Physics of Interfaces and Thin Films, CNRS at École Polytechnique, Palaiseau (France). In the period 2011-2017 he was a vice-chairman of the Council for Sciences at the AS, responsible for the Mathematics, Physics and Earth Sciences and since 2017 he is a president of this council. In 2017 Dr. Fejfar was appointed as the statutory deputy director of the Institute of Physics AS.

Research Interests:
Over 25 years of research activities oriented to physics of thin films of nanostructured semiconductors for application in solar cells and photonics.

A. Fejfar co-ordinated and coordinates many national and international research projects, incl. Horizon 2020, and FP7. Currently he is a work package leader of the H2020 project NextBase - Next-generation interdigitated back-contacted silicon heterojunction solar cells and modules by design and process innovations (2016 - 2019).

Publication activity:
Author or co-author of over 140 publications, about 2 450 citations,

Teaching, Pedagogic and Popularization Activities:
A. Fejfar is active as a supervisor of Ph.D. theses (10 Ph.D. students), as a consultant for other Ph.D. students and a supervisor or consultant of diploma theses (next 10 students). He lectures in the field of photovoltaics, nanoelectronics and nanoscopy at several universities (Brno University of Technology, Czech Technical University Prague). He is co-organizer of the International Summer School series held every three years in the Czech Republic. His R&D popularization activities involve also numerous lectures for the general public.